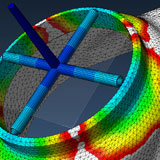 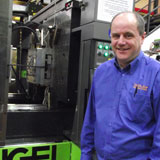 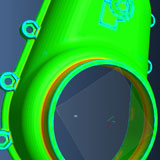 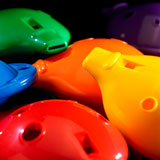 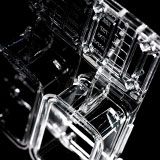 Patented injection moulding analysis ahead of tool production, ensures that a number of components in a revolutionary water powered rock drill are manufactured to the degree of absolute precision required by mining operations around the world.

Leicestershire-based Dudley Associates produce a polymer cover that plays a vital role in enclosing the drill’s rotary drive mechanism and protects the workings from damage and contamination at the working face of the mine, up to two kilometres underground.

Work Director John Churchard says accuracy of the cover, which is manufactured from 30% long fibre glass filled Polyurethane, is critical: “The flatness aspects are particularly important. As the component has the drive gear running through it, any distortion or warpage would cause the whole drive to bind and thereby have a detrimental effect on the drill efficiency.”

He says weld lines and weak points were also crucial factors in making the moulded cover robust enough to cope with the conditions underground while drilling blast holes. It was therefore imperative that the aluminium tool used in the injection moulding process was typical of the high spec, high precision work that makes Dudley Associates specialists in high grade aluminium tooling for a range of industries including automotive, medical and electronics.

Before they start to create such technical moulds, Dudley use VISI Flow (plastic injection analysis and simulation from Vero Software) to optimise the tool design and moulding process parameters. This ‘preventative analysis’ detects a wide range of potential manufacturing issues such as warpage, weld lines, air traps, filling issues and hot spots, while determining the optimum gating position.

Without it, according to Design Engineer Kevin Steele, many problems would not be identified until the moulding trial: “If there’s difficulty filling the part it may mean changing the gate, or even moving the gate and runner. This can’t be done on the press, so the mould would have to go back to the toolroom to be reworked, and then back into the mould shop to be sampled again.” And that costs time and money.

“VISI Flow catches all problems at an early enough stage so we can make the changes before starting to produce the mould,” he says. Taking the guesswork out of mould prototyping with VISI Flow prevents tomorrow’s problems today.

When it comes to analysing how moulds for components such as the rock drill cover will perform, Kevin Steele uses the tools within VISI to validate part thickness and remove any features such as small fillets or engravings to ensure optimum flow simulation. Once satisfied with the part quality, the gates are added. “For all but the most complex gating, this is easily done by sketching the centreline of the runner/gates and applying the relevant features. Then the model is prepared for analysis.” The material is selected from VISI Flow’s database of more than 7,500 polymer grades, and the moulding parameters are set. “I usually run the first analysis based on values suggested by VISI, then I check the results of shear stress, temperature, pressure and frozen skin. These are grouped from ‘easy’ to ‘excessive’ and if anything looks problematic I load that value and examine the part to see where the problem is.”

Any required parameter changes are made and the analysis is run again until the results are acceptable. For this project, VISI Flow confirmed Kevin Steele’s use of a four-position multiple gate going through the centre, but where necessary it will flag up that the gate size or position must be adjusted. “For many parts that’s as far as the analysis is taken, but when we need to know more, I’ll set up a holding analysis. VISI Flow suggests holding and cooling times, but the fill analysis can also be analysed to look at which areas of the part are frozen off at what time.” This is followed by the shape analysis, which he says normally requires no further information unless there is a feature such as a steel insert in the moulding which limits movement.

“The part can then be studied to see where it will distort, and by how much. When comparing different process variables it’s useful being able to export an STL file of the distorted part into the CAD system and overlay it, giving a useful visual comparison of the options.”

Utilising VISI Flow’s host of features in this way gave Dudley Associates a full picture of how the tool would perform in the moulding machine, and gave them the confidence to commit to making the high grade aluminium mould, which now produces the covers on an Engel Victory 300 tonne moulding machine with robot arm.

Dudley’s parent company, Peterstow Aquapower, manufactures the drill in South Africa, which operates on untreated water without the need for conventional oil hydraulics or pneumatics. With changing many of the drill components from metal to moulded plastic , it has become extremely compact, portable and manoeuvrable. The closed loop system does not need oil or harmful chemicals, and the specialist Peterstow Aquapower technology eliminates the need for much of the underground infrastructure required for competing technologies, making it significantly more efficient and cost effective.

Post Production Analysis
As well as the pre-production analysis that proved to be so valuable in creating the perfect mould for the drill cover, Kevin Steele also uses VISI Flow’s Post-Production Analysis capability when an older mould is already in production and not performing as expected. “Once I’ve reproduced the issue, I look at various changes to the processing parameters to see what impact they’ll have. Doing this with VISI Flow means I can run as many options as required to solve the problem without tying up the machine all day.”

The company also has the optional overmoulding module, which recently helped them produce the perfect mould for an electronic bingo computer’s casing, which houses the screen players use to mark off their numbers. The casing is PC/ABS with a TPE overmould.

Expansion
As they seek to grow their business, Dudley Associates have recently acquired a neighbouring factory, taking them to a total of 14,500 square feet. They currently operate with 35 staff, which is likely to increase once they have transferred their eight Engel and Boy moulding machines into the new space. The Toolroom’s numerous surface grinders, manual mills, CNC mills and lathes and spark eroders, will stay in the existing premises.