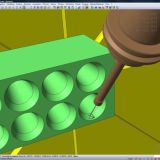 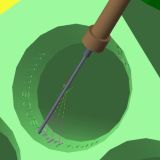 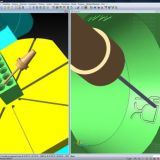 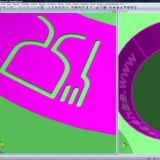 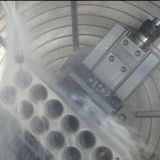 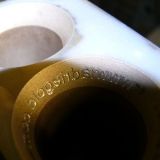 VISI CAM software ensures that ice cream vendors in Germany have an added degree of hygiene.

In a truly international case, three Czech Republic companies worked together with UK software VISI to produce hygienic holders for ice cream cones in Germany. VISI spol. s.r.o. collaborated with ABB Czech and SILROC CZ on manufacturing a product which ensures the ice cream vendor doesn’t have to touch the waffle cone.

ABB operates in around 100 countries with 145,000 employees, including over 3,000 from its operation at Jablonec nad Nisou in the Czech Republic. As well as producing its own range of products and systems that provide protection, control and measurement for electrical installations; along with enclosures, switchboards, electronics and electromechanical devices for industrial machines, plant and related services, ABB works with other companies on custom manufacturing.

An example of this is the collaboration with SILROC CZ, which manufactures moulded silicone products. The contract was for moulds for silicone ice cream cone holders. The waffle cone drops into the silicone holder, ice cream is dispensed, and the customer takes it without the vendor touching it.

The mould part was constructed at SILROC, which has used VISI for modelling and 3D machining since 2001. The part was then machined at ABB on a 5-axis HERMLE C 40 u machine. The most challenging aspect was engraving the upper conical wall of each holder, which was achieved with simultaneous 5-axis machining between two surfaces. Using a model of the machine created for ABB by VISI spol s.r.o., machining was tested on one position, and then moved to the other conical holders, with VISI’s kinematic simulation giving absolute confidence that there would be no collisions.

The 1-mm diameter coated carbide milling tool had an overhang of 200-mm to avoid colliding with the spindle, and was clamped in a long, narrow holder.

ABB now have all machining technologies from 2D to simultaneous 5-axis, along with wire erosion. VISI spol s.r.o. started working with them around a decade ago, supplying VISI as their principal CAM system for milling, and they have also recently upgraded to the latest VISI PEPS Wire technology. Machines include a Mikron VCP 600, HERMLE C 40 U and MAHO DMC 1035 mills; EDM wire eroders Makino EU 64 and Agie-Charmilles AC PROGRESS V2; and Makino and Ingersol EDM sinking eroders.

ABB technologist Václav Novotný says they mill as much as they can, as VISI enables them to produce high quality parts, quickly and cost effectively. “The default and automatically calculated parameters widely used in the various strategies are logical and extremely helpful. We have a central tool library that allows us to simply use the default tool on all computers VISI is installed on.

“We mastered VISI for our needs very quickly, which considerably reduced our programming time. If I were to sum up VISI in one sentence I would say it offers very fast computing speed for the machining operations we use most, and produces accurate parts with a high quality surface finish.”

All divisions of ABB Global have floating licences for another CAD/CAM software package, but ABB Czech prefers VISI so much that it pays an annual maintenance contract to use it. Václav Novotný says: “We see VISI as a major CAM system, while the other package is primarily a modeller. In terms of CAM, what VISI comes up with, the other system implements several years later. VISI is a professional, high quality CAM that is so simple and intuitive to use.”

The company, whose head office is in Switzerland, has been operating in the Czech Republic, since 1970.

And SILROC CZ a.s. manufactures silicone rubber products in three main categories:  medical applications in the field of health and food, such as the ice cream cone holder; spectacle parts including nose pads; and technical products.